An on-line HPLC-GC-FID system is used to analyze hydrocarbon contaminants (method for mineral oils). A HPLC fractionation on a normal-phase column enables the separation into MOSH and MOAH as well as a clean-up from polar matrix components, such as fatty acids in food. The fraction of choice is transferred into GC (large-volume). The injection occurs on-column via a Y-piece. The solvent is evaporated in the uncoated pre-column and discharged via the vapor exit (partially concurrent solvent evaporation). The analytes are refocused at the beginning of the coated separation column (retention gap effect) and the proper GC separation starts. The detection occurs via FID due to the same response per mass of hydrocarbons and a simple quantification by internal standards. The usage of additional internal standards controls the HPLC fractionation and the evaporation conditions.

The tentative differentiation of hydrocarbon contaminants and their sources is possible to a certain extent via the peak patterns. The signals of mineral oils and synthetic hydrocarbons are distinguishable with some experience, whereby diisopropyl-naphthalene (DIPN) eluting in the MOAH fraction is a specific indicator for a contamination from recycled cardboard. Further, the common distribution of MOSH and MOAH from recycled board is roughly 80/20.

The methodology for mineral oils can be extended by a PTV injector for high boiling matrices and by an additional HPLC separation, such as on a silver-impregnated phase for monoenes (POMH).

Another multidimensional technique represents GCxGC-MS/FID, which is applied predominantly for the characterization of petrochemical products. This method is perfectly suitable for further investigations of the hydrocarbon contamination in foods, if the HPLC-GC-FID encounters its limits. The separation of the unresolved peak humps by a second dimension (two separation columns) enables a group-type analysis. Thus, a characterization of the contamination into mineral oils and synthetic hydrocarbons is usually possible, which supports the determination of the sources. 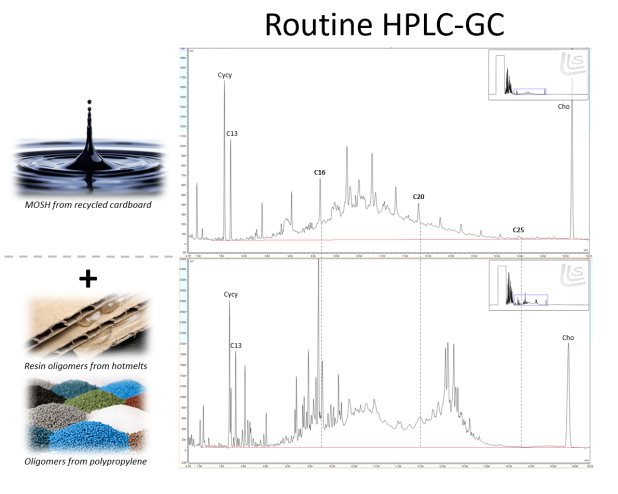 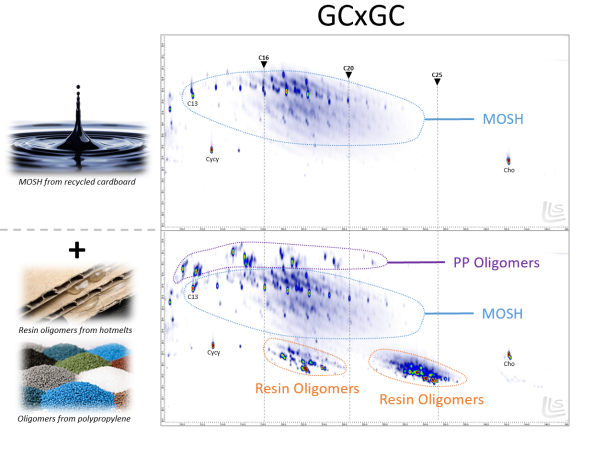